ABOVE: The combination of a New York-Albany infrastructure upgrade program for Amtrak and Metro-North's ‘Hudson Line’ and the introduction of shiny new modern Siemens Venture trainsets would make for a impressive “Higher Speed Rail” program, one on par with the Amtrak’s Northeast Corridor and new Miami-Orlando 'Brightline' intercity passenger service now under construction.

As the Biden Administration and the US Congress push forward in passing a near or over trillion dollar infrastructure plan that is expected to include many tens of billions in funding for passenger rail, the State of New York finds itself ill-prepared to take advantage of this sudden influx of federal money to advance its passenger rail program, as that passenger rail program has been stalled in the station for years with an outdated federally required State Rail Plan and an incomplete Tier One Environmental Impact Study (EIS) for the Empire Corridor that has been in limbo since the draft EIS was publicly released in the spring of 2014.

To spend over a decade failing to complete and release a rail study has got to be a record, although not one to be proud of! Still the last decade as seen New York State complete a number of important rail infrastructure projects – from the Albany-Schenectady Second Track to new stations at Schenectady, Rochester, Buffalo-Exchange, and Niagara Falls despite the lack of an Empire Corridor EIS, so indeed there is work that could be done despite the failures in the broader planning and design of the New York State supported and Amtrak operated intercity passenger rail service along the New York City to Niagara Falls Empire Corridor.

So, what rail projects in Upstate NY can be funded without a completed EIS for the Empire Corridor? At ESPA we have compiled a list of “low hanging fruit” of rolling-stock and infrastructure investments – several of pressing necessity – that can be funded, designed, and built over the next few years with federal grant money from the congressional transportation and infrastructure bills. These projects do not substitute for the overarching need to complete a final master plan (FRA approved Empire Corridor EIS and State Rail Plan) for the Empire Corridor, but they would improve service and lay the foundation for bigger things to come for intercity passenger rail between Manhattan and Niagara Falls.

- New Side Platforms and Pedestrian Bridge at Hudson Station

The first group of projects are all in the Hudson Valley and where first compiled in the Hudson Line Railroad Corridor Plan that was released in 2005, and then subsequently included in the 2009 State Rail Plan, all the “build” alternatives (ALTs 90A, 90B, 110, and 125) of the 2014 Empire Corridor DEIS, and Amtrak infrastructure plans for the Northeast Corridor. According to the Empire Corridor EIS completing these projects would allow travel times NYC-Albany to be reduced to 2:05 from the current 2:25, with daily round-trip train frequency increased to 16-to-24 from the current 13 daily round trips. These projects would open longer segments of track for 110-mph running, reduce trip times and delays by adding new segments of third track to allow fast Amtrak trains to pass slower freight and commuter trains, and overall increase capacity to allow for an Amtrak to become hourly shuttle service between Manhattan and Rensselaer.

Because these projects are improvements to existing infrastructure on an officially supported railway controlled by passenger railroads Metro-North (Bronx-Poughkeepsie) and Amtrak (Penn Station-Bronx and Poughkeepsie-Schenectady) they are far easier to do then major infrastructure projects west of the Capital District on railroads owned by private freight railroads. The stalemate between New York State DOT and CSX Transportation over potential top speeds and other matters concerning future passenger rail service over the former New York Central mainline between Hoffmans (Schenectady County) and Buffalo has by delaying the completion of a final Empire Corridor EIS seemingly delayed completing projects south of Albany were there is no controversy and only agreement on the work to be done.

Why not get these projects south of Albany done while the state sorts out what to do west of Albany? Combined with the addition of new Siemens Venture trainsets (including dual-mode diesel-electric battery locomotives and coaches) for the Empire Corridor by Amtrak (part of a broader fleet renewal for Northeastern services) over the coming years, this would make for a impressive “higher speed rail” program that would equal the level and quality of service of the new Miami-Orlando Brightline intercity rail service now nearing completion in Florida. 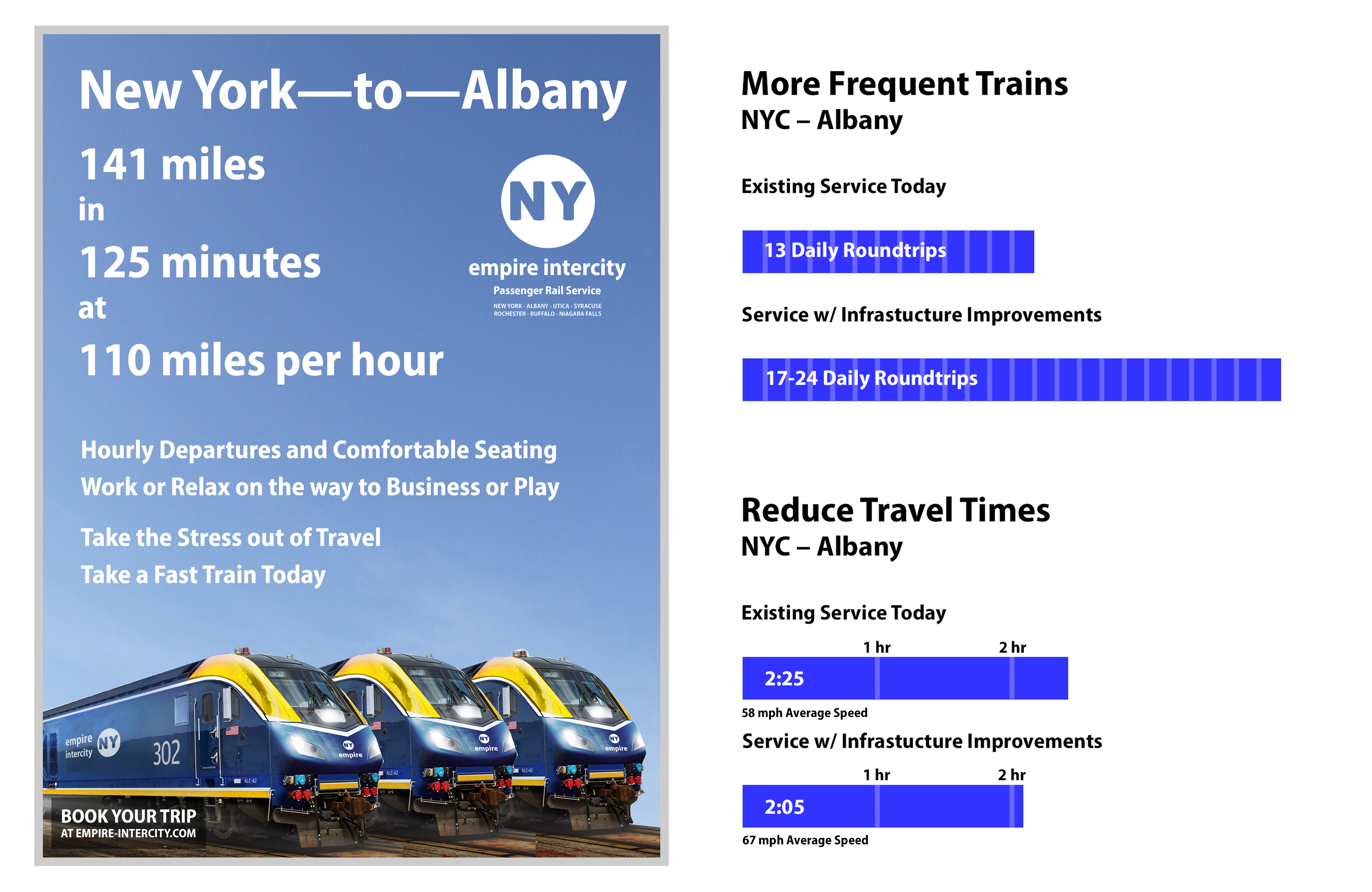 The need for a new Amtrak fleet for the Empire Corridor has growing increasingly dire as the existing overworked and overage dual-mode locomotives increasingly fail, new motive power can not be ordered and delivered soon enough – sadly rail service is likely to deterioration as Amtrak is force to accommodate a increasing unreliable fleet of locomotives whose replacement process should have started several years ago, with new locomotives being delivered now, as opposed to several years from now. The good news is that Metro-North has already begun the acquisition process to replace its dual-mode fleet, while New York's state-supported Amtrak services will have its decades old Amfleet coaching stock replaced as part of the 83 new Intercity Trainsets that the passenger railroad is aquiring from Siemens Mobility for its Northeastern services. This $7.3 billion order will include a number of dual-mode diesel-electric overhead catenary locomotives to eliminate engine changes for Northeast Corridor trains that travel beyond electrified territory and diesel-electric battery locomitives for the Empire Corridor trains north of Penn Station.

Then there are a number of infrastructure projects north and west of Albany whose planning and construction could be funded before a final Empire Corridor EIS is released. The lack of a final master plan might seem an immovable obstacle to investments in infrastructure – since how can you build before you know what your building – yet there are a few projects that can go ahead so as long as they accommodate all future infrastructure and service plans laid out in the four build alternatives (90A, 90B, 110, and 125) of the 2014 Empire Corridor DEIS.

For example, a proposed downtown station for Amsterdam could be built with a off the mainline island platform, that in a future phase two would see its platform tracks incorporated into the through passenger-dedicated mainline tracks included in ALTs 90A, 90B, and 110. Other potential projects include building a Border Preclearance Facility at Montreal Central Station so that the NYC-Montreal Airondack doesn't have to stop at the US-CAN border for customs and immirgation inspection, rebuilding the crumbling high-level platform at the Syracuse Rail Station, and building a new Amtrak station at Dunkirk, NY that would be served immediately by the Lake Shore Limited, and then by future proposed passenger trains to Cleveland and beyond. 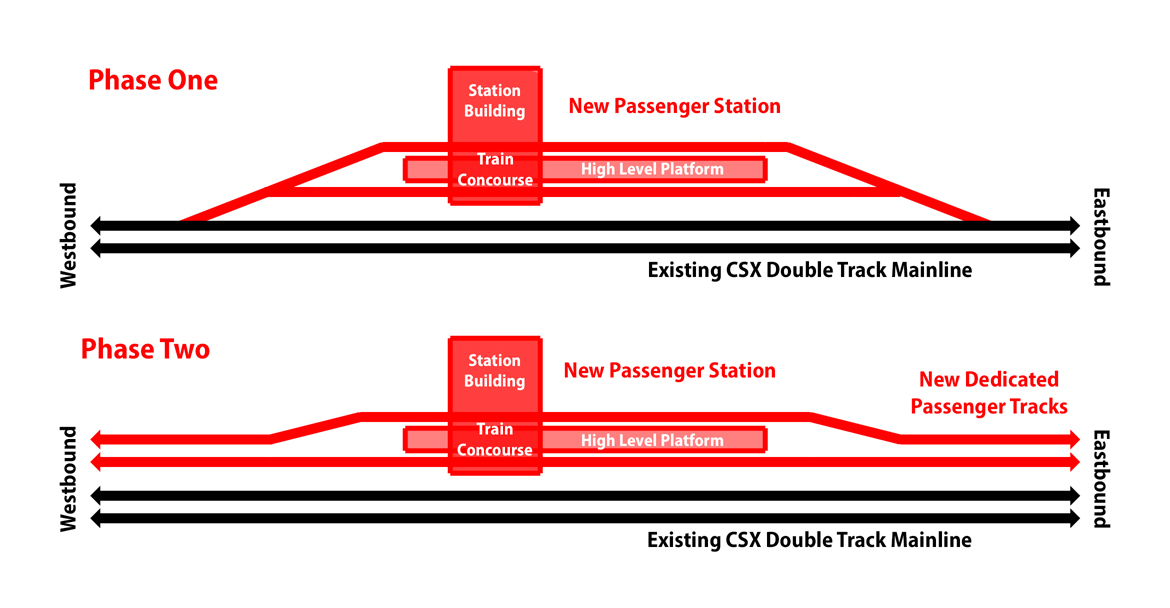 Yet completion of a final Empire Corridor EIS and an updated State Rail Plan is essential if west of Albany service is to see a major expansion with reduced travel times and increased train frequencies. ESPA most strongly urges that this be done by the State of New York with the utmost speed. However, till then, we also urge that the State push forward to get funded in the expected federal infrastructure bill the worthwhile projects that will be included in any future state rail program.

The New York State Department of Transportation (NYSDOT) and the Federal Railroad Administration released in Spring 2014 the High Speed Rail Empire Corridor Tier 1 Draft Environmental Impact Statement (DEIS), a detailed environmental analysis of improvements to passeneger rail service along the Empire Corridor to make connections between cities faster, more frequent, and more reliable. The 463-mile Empire Corridor runs north and south between Albany and New York City, and east and west between Albany and Niagara Falls. As of Summer 2021 release of the final EIS has been delayed to 2022. 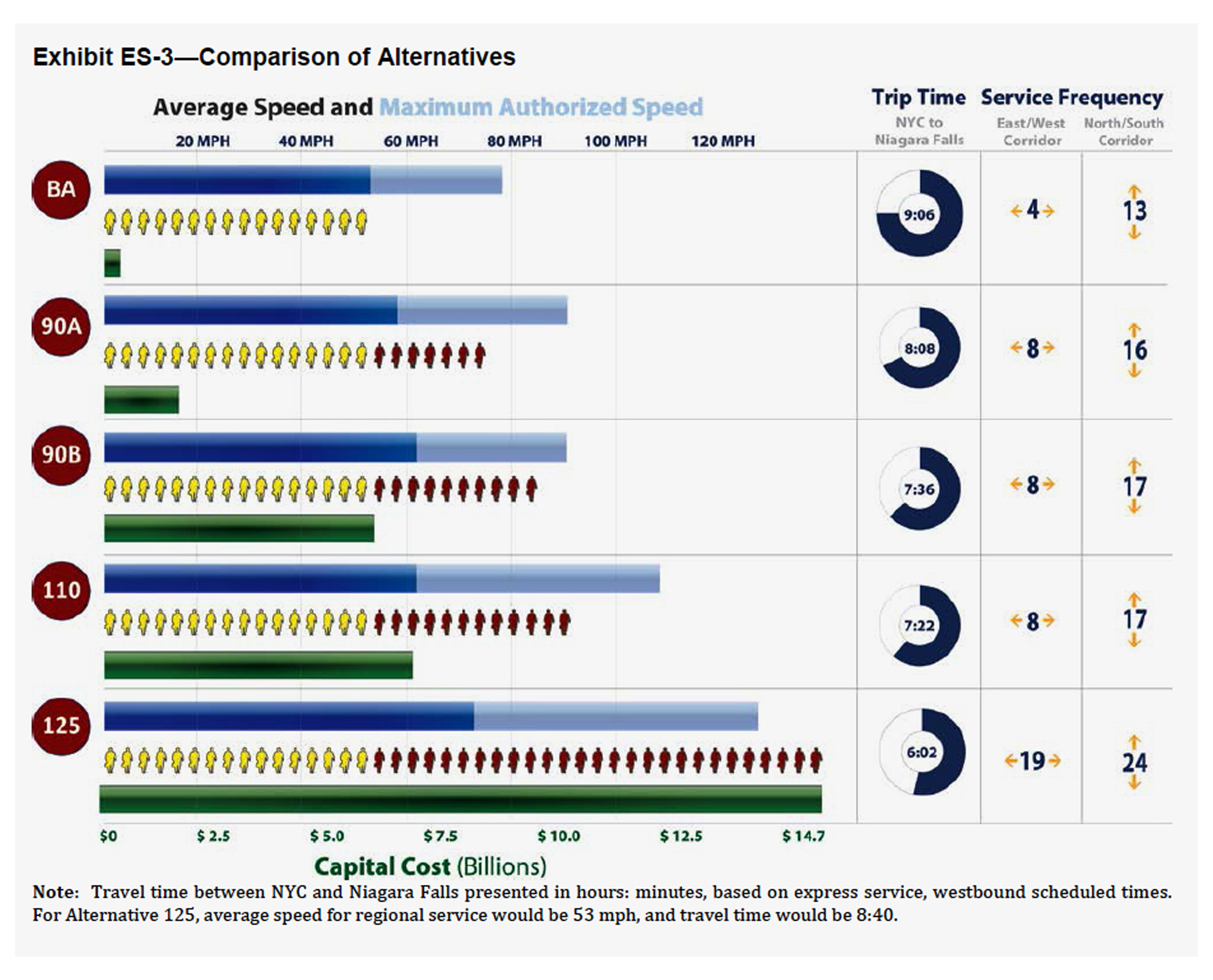 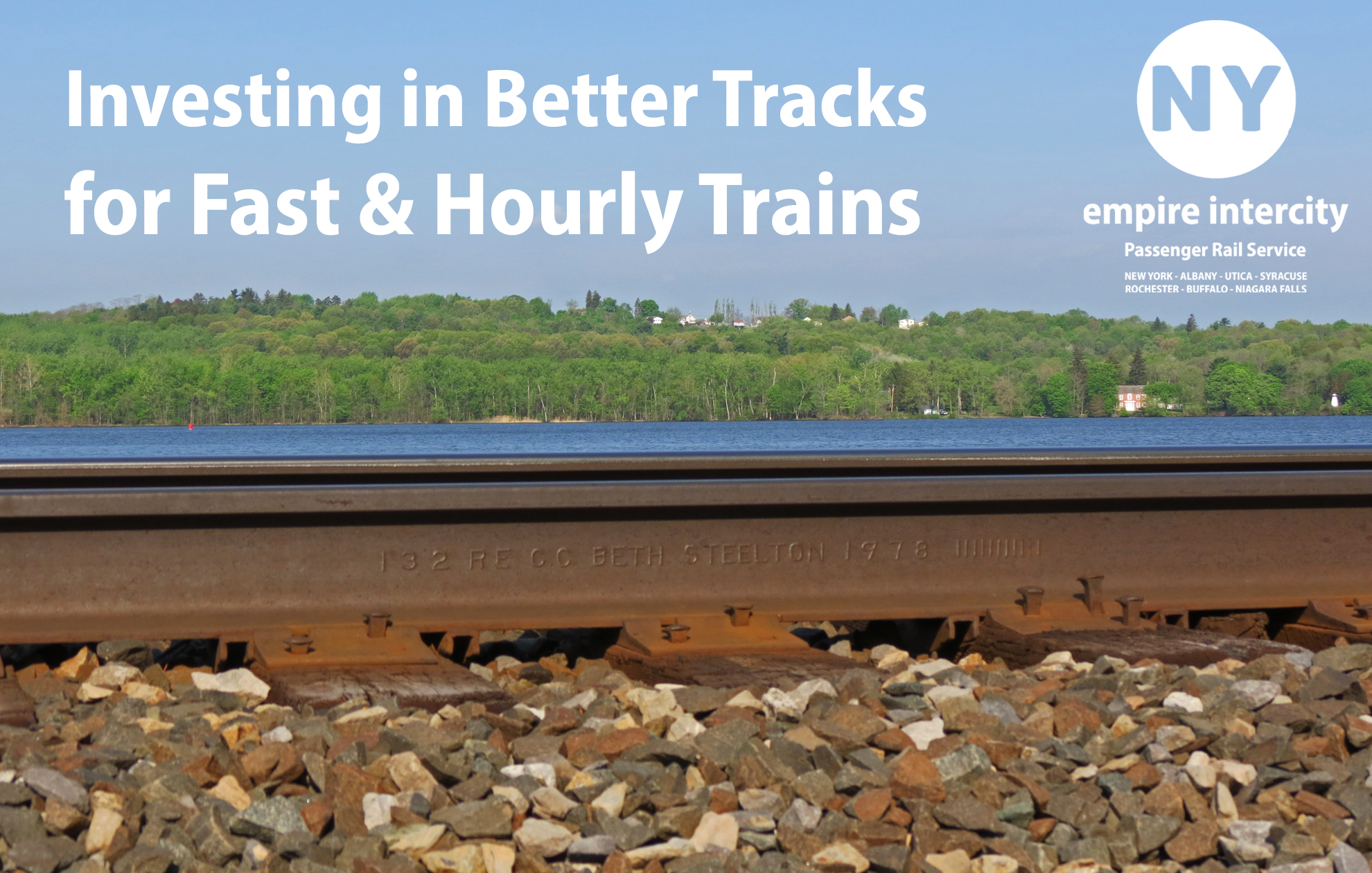 This is an ongoing Metro-North project to install a modern high capacity signaling system Croton-Harmon (MP 32) to Poughkeepsie (MP 75) to replace the existing aged and obsolete signaling system. The new signaling system will provide improved track capacity through shorter signal blocks that will provide operational flexibility, helping to improve service reliability. This is a funded project included in the MTA 2020-2024 Capital Program.

This project would add a second mainline track to Amtrak’s Empire Connection (West Side Line) from CP Inwood (MP 9) across the Spuyten Duyvil Bridge to CP 12 on Metro-North’s Hudson Line. Double tracking will eliminate conflicts between trains, improving reliability for both Amtrak and Metro-North passenger trains.

This project would add a pocket track and rebuilt interlocking (CP 24) at Tarrytown to enhance both capacity and reliability by accommodating Metro-North train turnarounds at the Tarrytown Station without blocking the mainline, eliminating delay causing conflicting moves between Metro-North and Amtrak trains.

This project would build a third mainline track from Cold Spring (CP 53) through the Beacon Station to CP 63 (Chelsea, Town of Wappinger) incorporating the existing controlled siding from CP 58 to CP 61. The improvement will reduce congestion and delays by allowing faster Amtrak trains to overtake and pass slower Metro-North and freight trains.

This project would convert current station Track 3 and controlled siding to CP 72 to a third mainline track and extended it to a new interlocking (CP 71) at MP 71, creating 4 miles of third track south of the station. New third track segment will enhance meet and pass capabilities, increasing capacity and reducing delays.

These are three related projects to build three two-track high-speed universal interlockings at MP 82, MP 99, and MP 136. This investment would help reduce delays by increasing flexibility of double track mainline by allowing trains to cross over from one mainline track to the other mainline track during maintenance periods when a track is out-of-service; or to pass other trains during normal operations.

This project would build two new platforms on each side of the double-track mainline, with a connecting overhead bridge and associated stairs and lifts to allow the simultaneous passenger boarding/alighting on both main tracks. The existing holding signals at CP 115 would be converted to non-controlled automatic signals.

This improvement would eliminate the current loading of passengers onto trains on Track 2 by crossing and standing on Track 1 allowing for simultaneous train operations on both mainline tracks. This will reduce delays by eliminating the safety requirement that dispatchers hold opposing trains from passing through the station tracks when Amtrak trains are boarding and alighting passengers.

Due to the 4-degree curvature at the station the 2005 Hudson Line Transportation Plan assumed building two new 500-foot-long low-level platforms with mini-high-levels on the current station site. Building high-level platforms would require a major realignment of the track or shifting the platforms several hundred feel north or south of the existing station site.

The Livingston Avenue Bridge, due to its age and function as a vital crossing of the Hudson River, is one of the most important pieces of the Empire Corridor network that needs rebuilding or replacement. The New York State Department of Transportation (NYSDOT) has started a study project for bridge rehabilitation or replacement. Funding for construction has not yet been allocated by the state or federal governments. 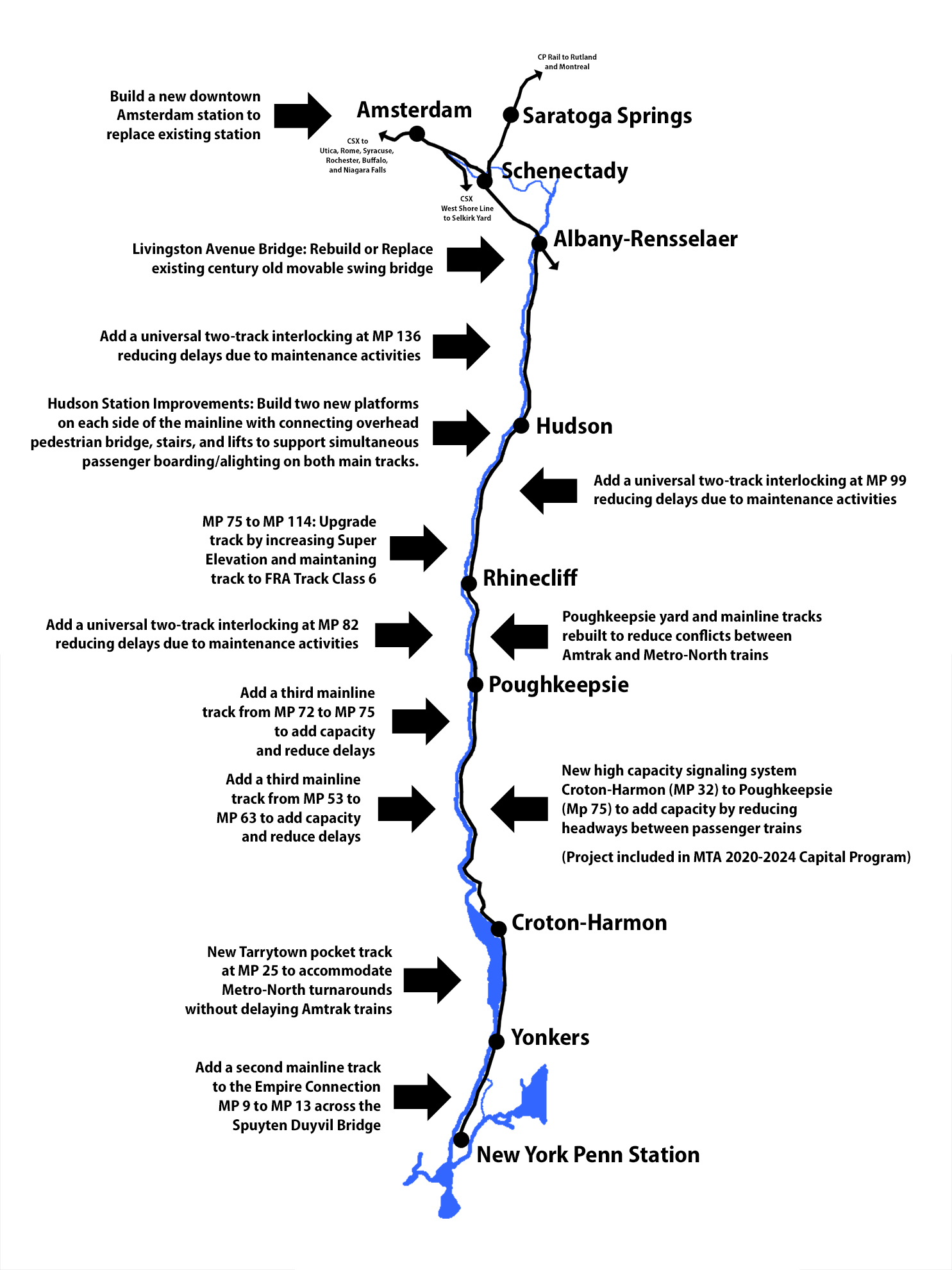