The Livingston Ave Bridge (LAB bridge) viewed from the north, with Albany to the right (west) and the Rensselaer yard and maintenance facility to the left (east). The bridge including the existing stone piers were orinally built in the late 1860s, with the steel superstructure rebuilt in the early 1900s. The central span of the movable bridge swings open to allow ships and large boats to pass.

Schumer explained the aging rail bridge, which connects Albany and Rensselaer, is in desperate need of repairs due to antiquated machinery and design, which may cause the mechanism that allows the bridge to swing open to accommodate marine vessels to fail. Schumer said the bridge is a vital connector for the Capital Region, and New York State, and allowing any of its infrastructure or machinery to fall into further disrepair would have tremendous economic impact throughout the region.

It’s long past time to make critical repairs to the Livingston Avenue Bridge; its aging infrastructure is putting Capital Region economies, businesses, and safety at risk. As Majority Leader, I am proud to have secured over $22 billion in the Bipartisan Infrastructure & Jobs Act for Amtrak, including $16 billion for its national network that can be used for projects in the Empire Corridor like the Livingston Avenue Bridge,” said Senator Schumer. “But now it’s time to put that money to use in places we need it the most, and to put fellow residents to work making these vital improvements. That’s why, I strongly urge Amtrak to use this rare opportunity to address this vital infrastructure asset that will soon turn 120 years old.”

Schumer added, “The pandemic has revealed the need for nature and safe outdoor transportation, like bike and walking trails, even in the heart of a city; a new Livingston Avenue Bridge must include a pedestrian component that will link the well-developed walking and biking trails along the river. This would provide the Capital Region a tremendous opportunity for economic development, tourism, and a reconnection to the historic Hudson River waterfront.”

Albany Mayor Kathy Sheehan said, “The bipartisan infrastructure bill allocates billions of dollars for some of our most under-invested and over-utilized rail lines, and one of the most deserving projects of this funding is the construction of a new Livingston Avenue Rail Bridge. This shovel-ready project will not only revitalize the bridge closest to the ninth-busiest train station in the nation, but it will create a pedestrian and bicycle friendly path across the Hudson River – further connecting Albany and our Riverfront with points east. I thank Senate Majority Leader Schumer for his commendable leadership for securing this vital funding, and echo his call for Amtrak to make this critical investment as part of the historic Build Back Better infrastructure package.”

Schumer explained that as a part of the Bipartisan Infrastructure Investment and Jobs Act, which he negotiated in the Senate, Amtrak would receive $22 billion, containing $16 billion for operations outside of the Northeast Corridor, including Upstate New York’s Empire Service. Schumer said that Amtrak should use this unique opportunity to make critical investments in projects like the Livingston Avenue Bridge in Albany.

BELOW: The Albany skyline from the LAB bridge, with the closed pedestrian walkway in the foreground. 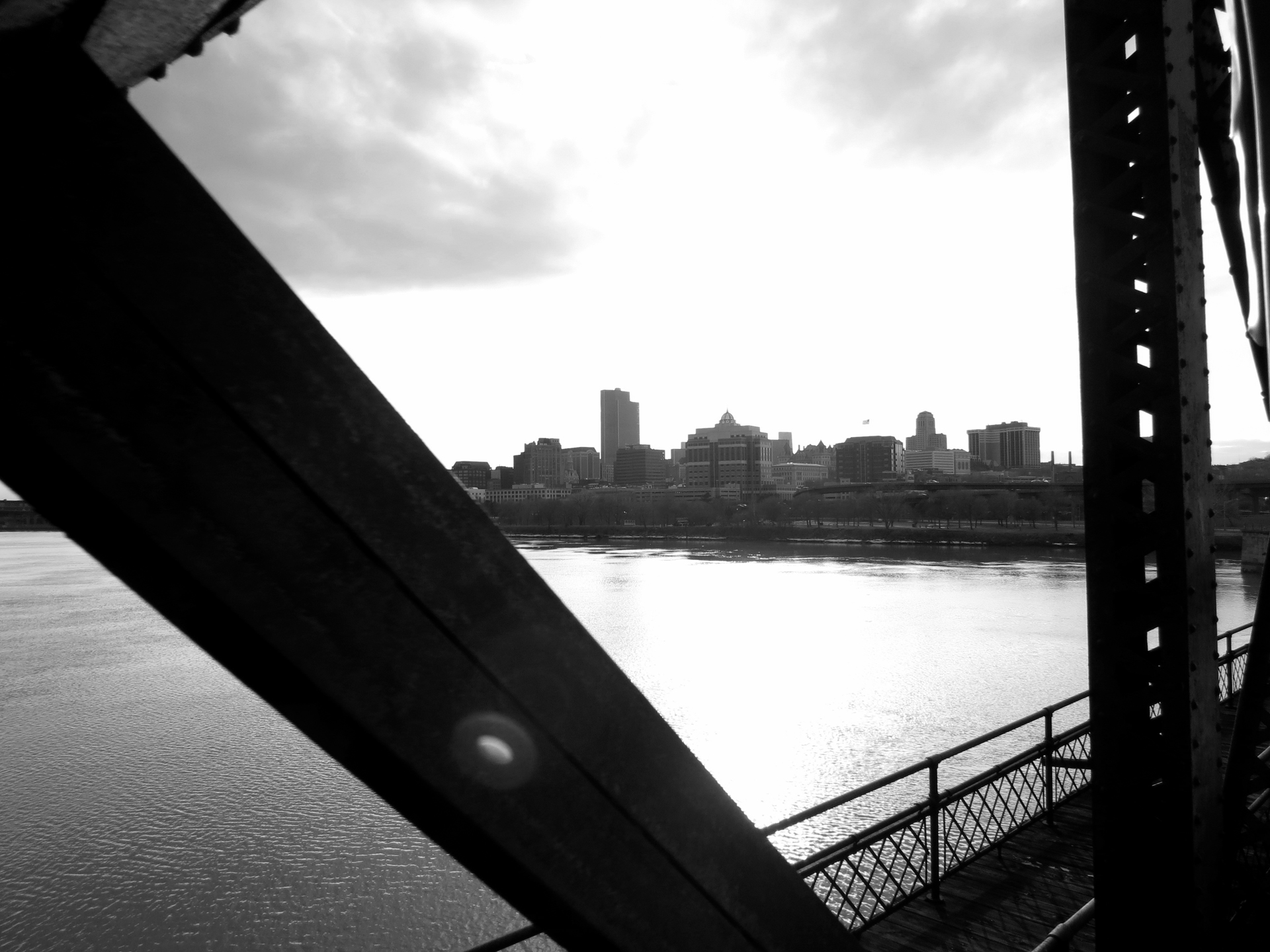